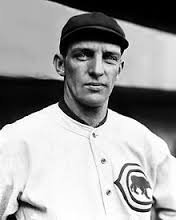 When composing a list such as this, it is fairly common to come across a player you are only vaguely familiar with.  But that is not the case with Frank Schulte, I had never heard of him.  Schulte was a contemporary of Tinker, Evers and Chance and played for the Cubs from 1904 to 1916. He was the 1911 NL MVP and (get ready for this) played in 4 World Series with the Cubs losing to the White Sox in 1906, beating the Tigers in 1907 and 1908 and lost to the Philadelphia Athleticss in 1910.  He hit .321 in those 4 World Series.  Schulte hit 91 home runs for the Cubs and only hit 1 more after he left the team in 1916.

For More A to Z Blogging click here.
Posted by Home School Dad at 4:07 AM

I don't know much about baseball at all, but Frank sounds like he was a top notch player in his day.

I'm not a big baseball fan. Not really into any sports these days. But I know they abound all over the place! Enjoy the AtoZ!
Revisit the Tender Years with me during the #AtoZChallenge at Life & Faith in Caneyhead!