R is for Ron

R is for Ronny 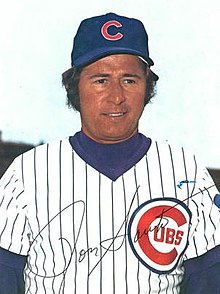 Cubs, White Sox
I may be the only person who liked it when Ron Santo came to the White Sox for his final season in 1974.  I was a kid,I had just switched alliances from the Cubs to the Sox and one of my favorite Cubbies was coming to the South Side.
The person who liked the arrangement the least was  probably Santo himself .  He wanted and thought he deserved to retire as a Cub.  When the Cubs let him go he opted to go play for the Chi-Sox, as he had thought he had more in the tank.

As it  turns out he had very little left in the tank and had an abysmal year.  Instead of focusing on his unhappy ending, I prefer to look back at the amazing things he did as a Cub.

Santo hit 337 of his 342 career homers for the Cubs. He averaged 30 homers per season between 1964 and 1968.  During that same 5 year span he also had 5 consecutive gold glove awards so he was definitely a stellar offensive and defensive player.

For More A to Z Blogging click here.
Posted by Home School Dad at 4:21 AM